History of the Lagotto Romagnolo

Thought to be the most ancient and the possible ancestor of all the water dogs, the Lagotto is a small to medium sized dog distinguished by his curly, water resistant coat. Lagotto is a Venetian/Romagnan dialect word meaning “duck dog” and the noted Romagnolo authority on the breed Gilberto Grandi describes them as “the Italian equivalent of the Irish Water Spaniel.”

Since Etruscan times (7th Century BC) a little breed of duck retriever has existed as a distinct type of dog in the vast marshlands of Romagna in north-eastern Italy. For centuries he helped his peasant masters hunt waterfowl but when large scale draining of the marshland started towards the end of the nineteenth century, the age old function of the Lagotto started to change. The vast flocks of waterfowl disappeared and the Romagnolo increasingly used their dogs for searching for the much prized and very valuable underground tuber known as truffle.

The agility of the Lagotto to hunt inaccessible places allied to his phenomenal scenting ability soon resulted in him being crossed with other breeds to impart to them his hunting abilities and his amenable character. Thus the high level of homogeneity (the result of centuries of inbreeding in the marshes) became progressively diluted and whilst the numbers of Lagotto increased so did differences in their appearance. In spite of being such an ancient breed by the early 1970s it was estimated that there were barely a dozen pure bred Lagotto remaining in Romagna.

Fortunately before the breed disappeared entirely a group of Romagnolo comprising breeders, veterinarians and dog lovers decided to rescue their only indigenous breed from extinction. For over 20 years they educated and advised Lagotto owners and painstakingly recorded morphological details of hundreds of Lagotto. Gradually the breed was purified and restored to its homogeneous type albeit with the emphasis on the new role of the Lagotto as a truffle searcher. In 1993 the dedication of the Romagnolo to their ancient little duck hunter turned truffle searcher was rewarded when ENCI (The Italian Kennel Club) granted the Lagotto official recognition. FCI (the International body which governs pedigree dogs in all countries but the USA and UK) recognised the Lagotto in October 1995 and added Romagnolo to his name to indicate his origins.

Today the Lagotto is unique as he is the only pure bred dog in the world recognised as a specialised truffle searcher. However he retains all the characteristics of a water retriever, Lagotto are perfect swimmers being an exceptionally hardy little dog able to work long hours immersed in icy water. He is aided by webbing between his toes and a double coat which covers his entire body. Even the inside flaps of his ears are covered in thick hair to prevent water entering his inner ear when diving after duck. Limited facilities exist for duck shooting in Italy nowadays and only a few Lagotto are still used for their traditional purpose as waterfowlers however the foundation breeding pair imported by Ann Kemp and Gael Stenton into the UK in March 1997 came from the Mandriole kennels on the edge of the marshland, north of Ravenna. Lagotto from this kennel are still worked as duck retrievers from the traditional flat bottomed marsh punts.

By the time of the War of the Roses (1455–1485) the little water dog of the Romagnan marshes had evolved to such a high degree of homogeneity that the modern Lagotto is exactly the same in every detail of its morphology as the medieval Lagotto painted by Andrea Mantegna c.1460s (photo of the length of the wall showing the Lagotto is shown at the top of this page). Here to the immediate right is the part of the painting depicting the medieval Lagotto. As the additional magnified extract shows, the characteristic stance of Mantegna’s Lagotto is typical of a modern day Lagotto pointing and wishing to draw the attention of his owner to something interesting… 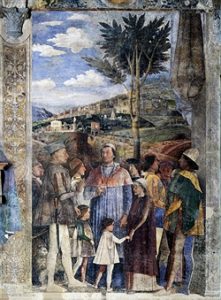 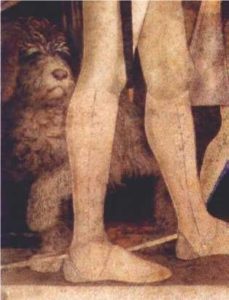 A couple of Centuries later and this painting by Giovanni Francesco Barbieri clearly depicts a Lagotto Romagnolo antecedent.

As Gael Stenton has previously commented, if the hair on this dog’s ears was more closely trimmed, it could jump off the table straight into today’s Championship show ring.

Written records of the Lagot exist from the end of the 16th Century. The following are just a few examples:

Erasmus of Valvasone in his poem “La Caccia” (The hunter) Friuli 1591 wrote: “We need a rough and curly haired breed of dog that does not fear sun, ice, water that climbs mountains, fords rivers runs onto steep rocky places; its head and hair resemble that of a ram, and it brings the bird back to the hunter merrily”

In the first edition of Ercolani’s “Vocabolario Romagnolo-Italiano” (The Romagnolo-Italian Language) 1876, translates “Can Lagot” as “Lagotto simply called “lagot” in the hunting jargon. It is a medium-sized dog with thick, bristly, curly hair. Good retriever in marshy areas”

Marquis Francesco Costa in his book “La Caccia in Italia” (The Italian Hunter) Naples 1880 wrote: “If you ever shoot coots, use quick and curly haired dogs that like water and mud a lot”

And breed specialist, Giovanni Morsiani, in his definitive book on the Lagotto (“Il Lagotto Romagnolo”) 1996 writes:

“Hence, starting from the archaeological remains dating to the V Century BC in the Etruscan City of Spina there is unquestionable evidence that Lagotto was present in the Lagoons of Comacchio and marshy areas of the lowlands of Romagna as early as 1400. The “vallaroli” or “lagotti” (as the inhabitants of the marshland were known) used small dogs with very curly coats. These inhabitants were the very soul of the lagoons which teemed with game.

Their inseparable companion was the small Lagotto, that watched the boat and the house, excellent retriever of coots in particular, when hundreds of small boats, in the famous “rake-like arrangement” surrounded flocks of thousands of birds and killed many of them. The Lagotto dived and plunged under the water often for many hours on end, even on very cold days, breaking the ice to bring the killed birds back onto the boat.

This is what could be defined as an “amphibian” behaviour, made possible by its thick hair, with very close curls and abundant undercoat: a true waterproof and water-repellent layer preventing water from touching the skin. It sufficed to shake, and the animal was perfectly dry.

Hence, the name “Lagotto” derives definitely from its water-dog function.”

Until the middle of the 19th Century much of Romagna was marsh, part of the vast wetlands of the upper Adriatic basin. These vast and remote marshes were home to prolific flocks of waterfowl that were hunted as a staple food by the marsh men – sometimes known as Lagotti (duck hunters) – who were helped by their inseparable little duck dogs which became known as Lagots, and later Lagotto.

The end of the 19th Century saw the draining of the flatlands in the Emilia and Romagna regions and the subsequent disappearance of much of the waterfowl. The lives of the marshmen changed and their little dogs faced possible extinction.

Fortunately at the beginning of the 1970s before the breed disappeared entirely, a group of Romagnolo (breeders, veterinarians and dog lovers) decided to rescue their only indigenous breed from possible extinction. Pictured below (from left to right) are breeder, Luciano Landi, Gilberto Grandi, Giovanni Morsiani and Quintino Toschi at the Palazzo Della Volpe, Casola Canina, Imola in July 1988.

Milestones for Lagotto in terms of recognition of the breed:

In the UK, the Lagotto Romagnolo became the last breed of the Millennium to be recognised by the Kennel Club. Import Classes followed in 2005, and Breed Classes in 2015