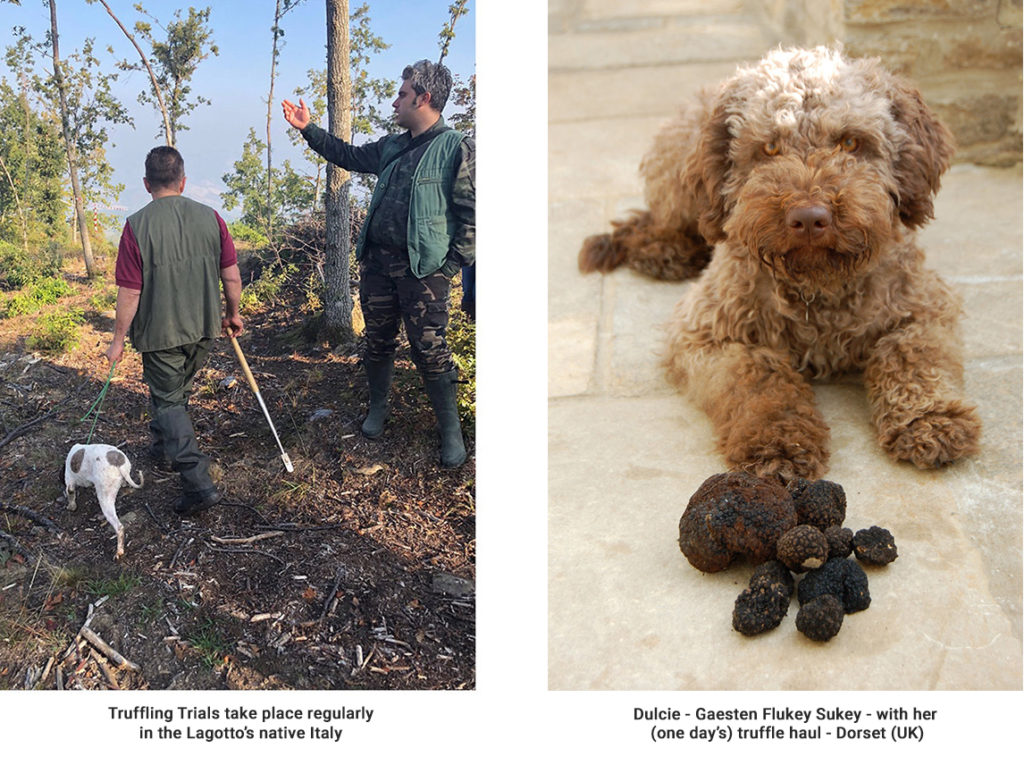 Whilst the traditional function of the Lagotto remains as a gundog/water retriever, its adaptation to the role of truffle searching following the draining of the vast marshlands of Italy at the end of the 19th Century (see History of the Lagotto for more information) is still evident today in certain countries. In fact, the Lagotto is the only pure bred dog in the world recognised as a specialised truffle searcher.

Club Italiano Lagotto, the first Lagotto breed Club, produced a DVD about truffling which is available to purchase in our Merchandise section. CIL organises truffle trials as a test of the breed’s working ability.

Other pages in our Truffle section: Truffling Training and Truffling Tests and Trials

The following article "As Lagotto is a truffler", translated from Italian, is reproduced by kind permission of Club Italiano Lagotto:

The gait of the Lagotto Romagnolo, when at work is characterised by a smooth, spirited and bright trot which highlights the joy experienced by the dog in carrying out its search for the truffle. Short bursts of speed are admissible at the start of the session, when moving back towards already-inspected terrain and during transfers: walking is admitted during verification.

The bearing of the head is directly related to the gait and speed of the dog. During the faster phases of the search the head is slightly raised but with a truffle nearby it is generally inclined towards the ground; during verification the head is steadily lowered until the snout rests on the ground. If there is a particularly strong emanation the Lagotto may raise its head considerably so that it can be guided by the wind towards the emanation itself (so it can, quite literally, be guided by its nose).

The tail may be brought into line with the spinal column or may be higher, but must not roll up onto its back or downwards. When trotting the tail moves cheerfully, often with fast, sweeping lateral movements. The Lagotto uses its tail to inform its handler of the presence of a truffle by accentuating this movement. It is important that the Lagotto’s tail expresses cheerfulness, playfulness and willingness to work.

The searching action should be eager, avid and determined, expressing intuition and initiative. The search should be performed along diagonal lines with frequent changes of direction, criss-crossing the terrain to be inspected in a thorough, detailed fashion.

The Lagotto must demonstrate intelligence, concentration and a refined sense of smell and adapt the speed and scope of its search to ambient conditions. The dog must establish an equilibrium between coverage of the terrain, sustained gait and highly accurate analysis which allows even the most difficult digs to be effected. This may occur even within a range of some tens of metres from the handler.

When the Lagotto enters the field of a slight, possible emanation it slows down to a walk and moves towards the presumed origin, gradually moving its nose closer to the ground and accentuating movement of the tail: the dog may also stop, take a few deep breaths and may show begin scratching. If the initial impression is not confirmed the dog immediately resumes its standard gait. If, instead, the presence of a truffle is confirmed the Lagotto will start scratching decisively.

If, during the search, the Lagotto finds a zone of emanation which gives the immediate certainty of an underlying truffle, it will move towards the emanation decisively and start scratching without hesitation.

When it perceives an emanation carried by the wind it will head towards the digging point even when some distance away: it may slow down, stop and breath in with its head raised high, facing the wind so as to get a better ideas as to the point of origin of the emanation.

Once the “forata” (digging point) has been identified the Lagotto must carry out a decisive digging action and may pause to make checks by sniffing the sides and bottom of the hole: doing this will help the dog determine the exact location of the truffle and allow him to direct the digging action accordingly. The search may even be directed outside the hole if the dog is convinced that the truffle has already been expelled by the digging action. Digging may be interrupted by the handler and should recommence promptly as requested. The behaviour of the Lagotto at the digging site should be such as to allow the handler to recover the truffle.

The Lagotto is characterised by an absolute and extremely natural rapport with the handler. Despite showing significant autonomy and initiative in the search, the animal is always attentive to the handler’s instructions even when some distance away from him, ready to draw near or direct the search in the indicated direction.

The cheerful, open and hard-working character of the Lagotto and its natural willingness to work ensure that it is not easily distracted from its task by external stimuli.

The Lagotto is also totally disinterested in the presence and smell of game. Fleeting interest may be aroused by a chance encounter, but the dog is nevertheless ready to recommence its search for truffles at the handler’s command.

Although truffles are not so common in the UK, they can be found, as demonstrated in the above picture of British bred Dulcie
(10 months at the time) with her haul of truffles found on home soil…

Below are some words from Dulcie’s owner, Sasha Dorey:
From the 17th Century to the early 20th truffle hunting in England was a cottage industry especially in the Southern counties, with its heart in the small parish of Winterslow in Wiltshire. The truffle hound was a poodle type and a good dog could find up to 8lbs of truffles a day. Truffle hunting slowly died out when a dog tax was introduced in 1860. The last professional truffle hunter was a man called Alfred Collins who had two poodle terrier crosses. He retired in the 1930’s. The Lagotto has been used to hunt truffles in its native Italy for many years. The first truffle hunting Lagotto was bought into the country in the 2000s and Dulcie (pictured above) was the first British bred truffle hound. I trained Dulcie with tiny pieces of fresh truffle trussed up in little parcels, first hiding them in the house then taking the scent work out into the garden and finally burying them in soil. This is the easy bit!  To find truffles in the wild requires the qualities of a tenacious detective, a degree in Geography and a great deal of time, in order to gather as much information as possible about the truffle and its favoured habitat, including host trees and soil types. I was incredibly fortunate to discover that I actually had truffles growing in my garden giving me a private training ground.  After two weeks of training Dulcie as a puppy in the house, she one evening started to dig under a hornbeam hedge and lo and behold she dug a truffle and then another and another… The most common truffles found in the UK are tuber aestivum/uncinatum and tuber brumale which is less good to eat and is unfortunately gaining ground over the uncinatum. They have a symbiotic relationship with the host tree,  each providing the other with nutrients. Beech, oak, hazel and hornbeam are the most common host trees which need to be growing on an alkali soil in order for truffle to fruit. In the last few years, truffles have gained popularity in Britain. Many orchards have been planted up and down the country, some already successful. Truffle hunting has also become more popular though to what degree is unknown due to the secrecy of the activity!  It is not just in France and Italy that truffles are hunted commercially. Eastern Europe has a very well established industry, as does Iran, Australia, New Zealand and Sweden. Sasha Dorey, Dorset (UK)

Sasha has been successfully hunting truffles for many years. Her current Lagotto, Minnie and Ralf, have followed in Dulcie’s footsteps: Two more successful truffle hunting Lagotto in the UK! 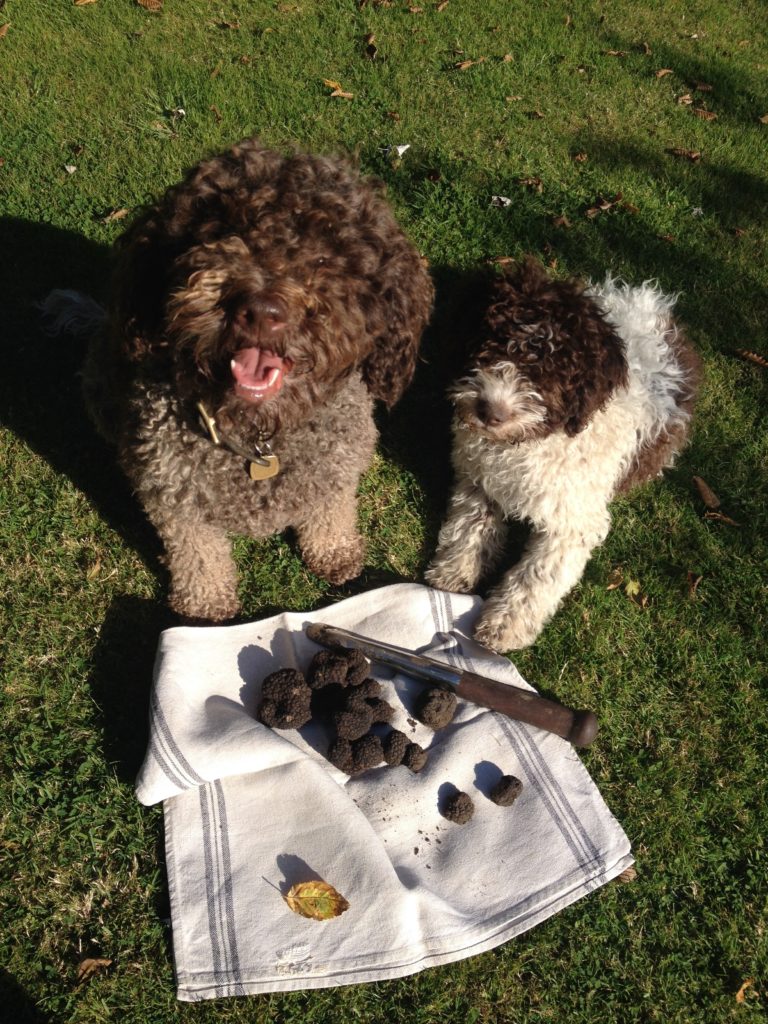 Our Member, Jonathan McGowan attended our Truffle Training with Denise Stalder in November 2021. By December the same year, they had found their first huge haul of truffles. 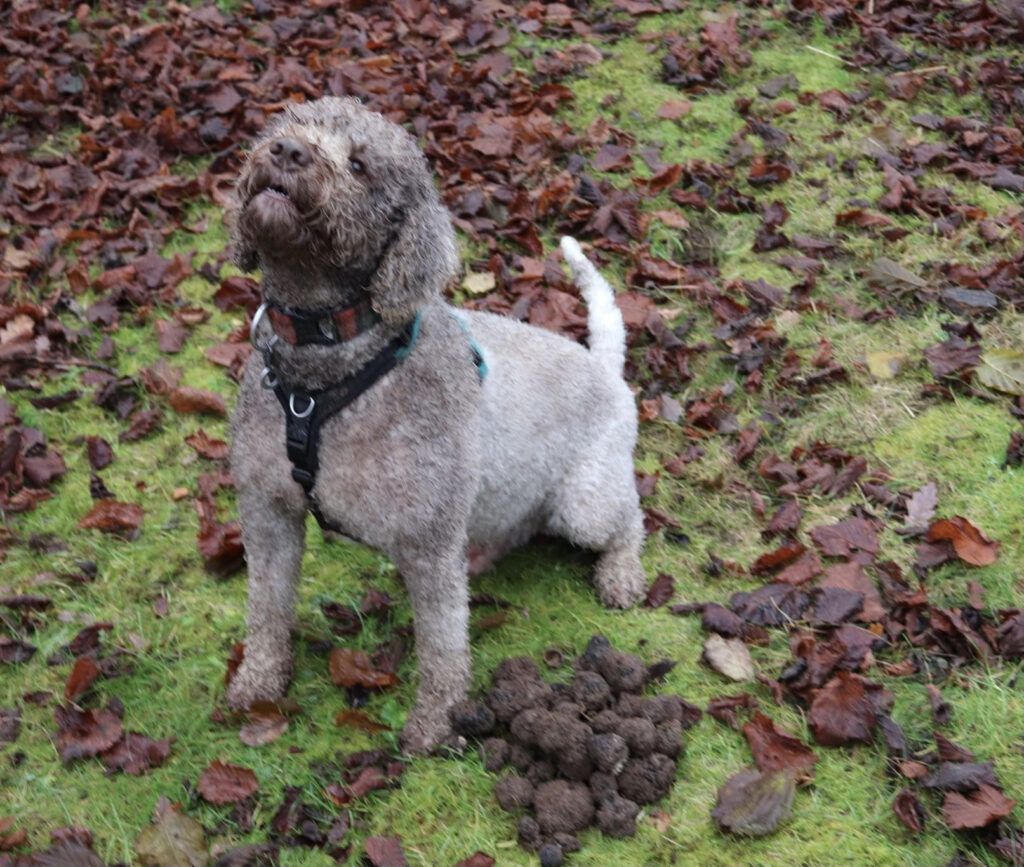 Unbeknown to us at the time of our training day, Jonathan had had a fascination for truffles since childhood, and when his Lagotto Tembo came along he was soon training him with truffle scent. You can follow Jonathan’s story here …